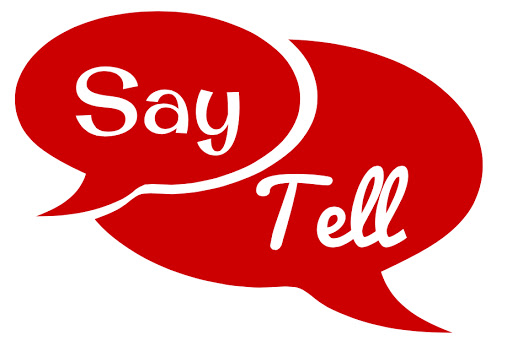 They asked if I was looking for work and I said yes.

Then he told me how he had got the job by lying about his age.

We use say and tell in different ways in reported speech. Say focuses on the words someone said and tell focuses more on the content or message of what someone said:

She told him they were going on holiday. (The focus is on the information.)

We use say with direct speech. We don’t normally use tell in this way:

Say and tell with objects

Both say and tell take a direct object. The object is most commonly the reported clause (the report of what someone said).

However, we use tell without an indirect object with words such as the truth, a lie, a joke, a story:

You should never tell a lie.

Say does not take an indirect object. Instead, we use a phrase with to:

And then she said to me, ‘I’m your cousin. We’ve never met before.’

Not: And then she said me …

We use tell with an indirect object and a to-infinitive to report a command or an instruction. We don’t normally use say in this way:

They told us to come back the next day.

Not: They said us to come …

They told her to wait till the doctor arrived.

But in informal speaking, we sometimes use say + to-infinitive to report a command or an instruction:

I asked him if he wanted it today but he said to leave it till tomorrow.

Then a loud voice said, ‘Hello.’

She said she would wait for us outside.

Not: She told she would wait …